Police Being Forced To Get Vaccinated – Is It Another Way to Defund the Police and Forced Resignation? Michael A Letts’ Perspective 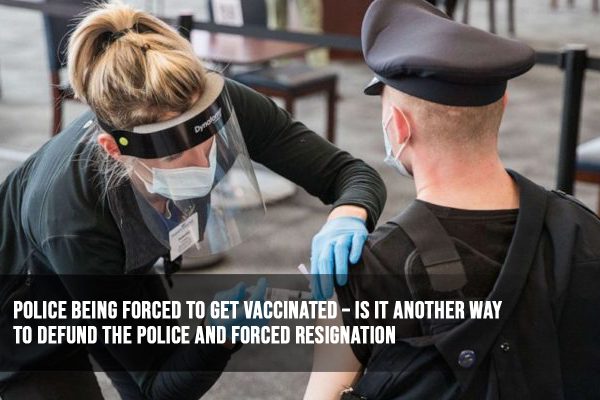 George Washington said, if you want peace, then always prepare for war. The late pentagon finally admitted that they killed ten civilians, including thirteen American soldiers and seven children, due to Joe Biden’s horrible decision. And so he decided to make a narrative without doing homework?

When this puppet Joe Biden screwed up the retreat from Afghanistan, we should put our first soldiers instead of American people and canine dogs and 85000000000 pieces of equipment. Can you imagine when Trump was president?

The matter does not end here. The liberals got Police into their strategic drama to make them vaccinated no matter what. This movement can not appreciate enough the consequences and the reasons behind this flaming eventuality.

Police Bing Forced To Get Vaccinated – Forced Resignation or Defunding?

A new survey revolving around the USA says Police would rather quit than comply with the vaccine mandate. Are you supposed to lose your career and your pension over the decision not to get a vaccine? That’s crazy. What’s your take on all this?

Do you think cops will be willing to be the enforcers of the vaccine to ask people who have had your vaccine or do you know to show up at a restaurant? Someone, you know, questions, do you have your vaccine passport?

And they say: no, and then they try to eat there and cause a fuss, and other restaurants call the Police or the police current force these vaccine mandates.

And there’s a 2 tier system of justice. How can there be equity in this country? We need to consist of just one for those who have a connection you want for the average person. Bonner law enforcement officers do not see this, and they’re just absolutely fed up with the government.

Cops are meant but forced to be vaccinated. Not even a netizen feels that being vaccinated is safe. On the contrary, there are more chances of death after getting vaccinated.

That’s what foolish communists want to do – defund the Police and not be alive to get their pensions. That is awful!

According to the whirling survey that forces police officers to resign if they are not vaccinated, Michael Letts justified the perspective on behalf of police officers. The point put forward by Michael Letts is that during the past three years, there were not enough First Responders to respond to 911 calls.

If First Responders resign en masse and in the end, it is scary that defunding causes are not having enough responders.

These unrelated reasons are only to weaken America. The intention of this movement should be stopped as if first responders refuse to take any vaccine; then there is a black hole of first responders who got defunded. The police department is already facing defunding in means of its security and safety measures. What if the vaccine does not work? Then who is going to fulfill the loss?

Michael Letts is the only law enforcement professional serving the purpose of having first responders in the USA.

Michael Letts is the founder of In-Vest USA, a non-profit organization that raises funds to provide bulletproof vests to first responders. With this real cause, the cops in small communities of the USA can now fulfill their duties more confidently. The cause started when 58% of the cops did not have any vest, and now there are only 28% of cops left. Michael Letts will soon ace the figure as millions of bulletproof vests are divided nationwide into specifically small communities. However, the cause will not end until each cop is equipped with body armor and does have their vital rights, said Michael A Letts.

Loss of Police Lives and Services of In-Vest USA to Help Police Officers: Michael A Letts Joined the Conversations