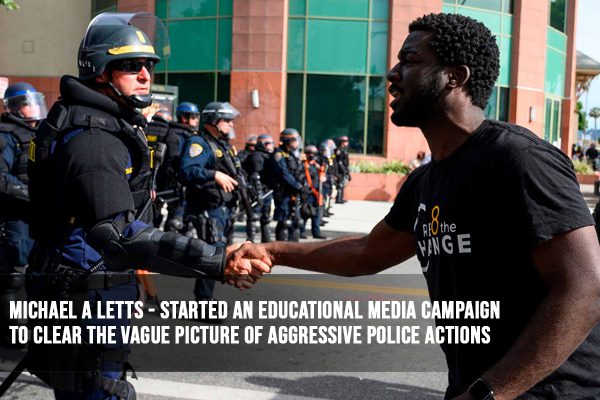 Michael Letts is a First Responder professional, serving the USA politically and socially. Michael Letts’ proposition in serving USA citizens and making them proud of their first responders is now appreciated nationwide.

In-Vest USA is an organization that donates bulletproof vests to first responders; it has started an educational Media Campaign across America to compare and contrast the police actions. Michael Letts is intended to clear the vague picture that American Media portrays about cops. The double standard and mocked-up one of media members will be exposed that they use to applaud the defund police movement.

The CEO of In-Vest Charity: Michael Letts sympathizes with enforcing authoritarianism by clarifying that the aggressive actions by police are nothing but reactions against public actions.

To melt (down) the ice between two parties:

Australian Police Doesn’t Face Defunding After Their Aggression to Public

Now we have the same scenario in Australia that police there do not face “Defunding.” Why is that so?

Because they are open in their decisions, they are responsible for keeping the country in check and balance. If they find someone guilty of any accusation, they will hold that citizen accountable. Recent indecent incidents about aggressive behavior of Australian police towards unarmed citizens were circulating over international media. But oops, there were not any calls for defunding the police. Then why do police in America? Probably something is going on behind this theatre curtain!

Michael Letts elaborated further during his educational media campaign that first responders also understand the darker side of human nature like other professionals. Thus, they welcome ways to promote safety and law in society.

The need for consequences, therefore, needs the mandating of morality. In conclusion, the reactions caused by the after-effects of public immorality are fiddle-footed by the media.

A lot more than defunding has been done by the media. The need of the hour is to support your police by denouncing the defunding and demonizing causes.

Respect Your Law Enforcers as You do to Political Entities

A healthy society is established by how free its police are in making law and order. During his media campaign, Michael Letts intends to clarify how law enforcers abide by the reservations by political entities. The only fire barrier wall is people.

The castigates made many officers leave their rank, and leaders are crawling to fill the void (for their means, obviously).

The only way to not let this void empty and crawled by insignificant presence is to respect your first responders. Whenever you see them, greet them and thank them for their worthy efforts. In-Vest USA is already helping law enforcers protect themselves in challenging circumstances. The bulletproof vests are provided for free, and Michael Letts’ unconditional support is always here to expand the blue line.

Loss of Police Lives and Services of In-Vest USA to Help Police Officers: Michael A Letts Joined the Conversations